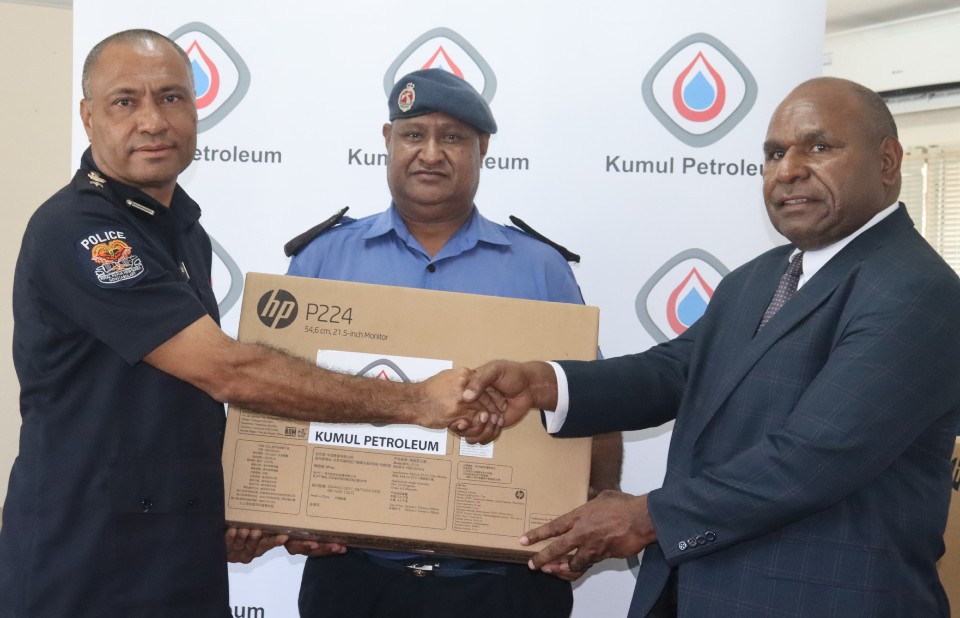 Port Moresby, 3 March 2022 – The Criminal Investigation Department (CID) of two of Port Moresby’s major police stations were given a corporate boost to give it the capacity to efficiently process criminal records following a donation of brand new I.T. consumables valued at close to K40, 000.00

Kumul Petroleum’s support to the Royal Papua New Guinea Constabulary is to create, build and foster external relations with the company’s key stakeholders and is core to its business as the NOC in strengthening strategic partnerships that benefit all Papua New Guinean’s.

Mr Luke Liria Executive General Manager-Corporate Services of Kumul Petroleum speaking on behalf of the company said that Port Moresby being the nation’s capital is home to all Papua New Guineans and the company in responding to the call for assistance from the Royal PNG Constabulary supports the government institution to carry out its mandate to protect Port Moresby residents.

Kumul Petroleum purchased and donated one laptop and two desktops to the crime and investigation unit of Boroko Police Station while also donating four laptops and 3 desktops to the Town Police located at Port Moresby’s CBD.

Superintendent Administration of the NCD Metropolitan Command, Christopher Tamari said of the donation:  “Both Police station serve as a booking station especially Boroko which houses the only gazettal cell and is the major station in the city. With this donation, the stations minor crimes unit will be able to ensure that complaints under schedule two of Criminal Code are processed effectively and efficiently to allow the administration of justice to prevail.”

Superintendent Christopher Tamari on behalf of the Royal PNG Constabulary and the two police stations acknowledged Kumul Petroleum for its support as the computers will be a great help to the police officers and its respective CID to be up to date with its crime reporting for investigation and prosecution.

He further stressed the importance of The Royal PNG Constabulary’s mission statement “Securing a Safer Community in Partnership” and as such, fosters Private Public Partnership policy initiated by the Command in 2021; is a step in the right direction given the tough economic times and further urged officer’s to take care of the station assets.

The Royal PNG Constabulary is a law and Justice sector of the government that provides policing to law and order throughout the country.