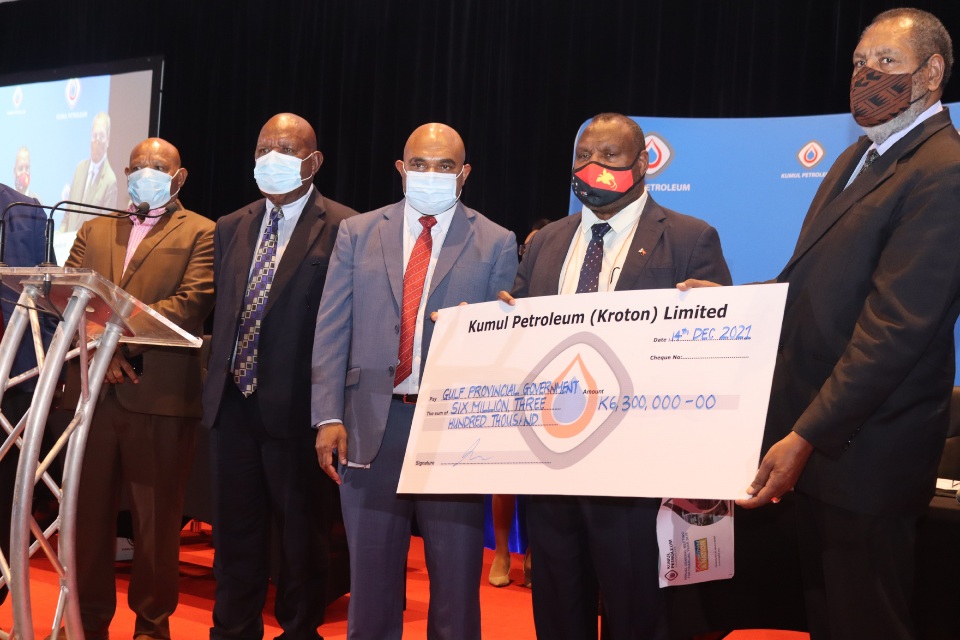 This is the first dividend payment after the Kroton Equity Beneficiary Groups exercised the Kroton Equity Option (KEO) in December 2016 under KPHL Offered Vendor Financing. The dividends had been accumulating since 2017 and had been held in trust by Kumul Petroleum.

The five provincial governments and the landowners from the well head, pipeline and LNG plant site areas in those 5 provinces along the footprint of the PNG LNG Project together constitute the Kroton Equity Beneficiary Group.

The landowner’s component of the preferential dividend is Circa K189.189million which will be paid soon to all the beneficiaries that have completed Clan Vetting, elected their executives and vetted by Department of Petroleum, Electoral Commission and MRDC.

Under the 2009 Kokopo Umbrella Benefit Sharing Agreement (UBSA), the National Government granted Kroton Equity Beneficiary Group an option to acquire an indirect 4.27% interest in the PNG LNG Project by buying 25.75% of the shares in Kumul Petroleum Kroton Limited (Kroton No.2 Ltd), which then was known as Kroton No.2 Limited and is the special purpose subsidiary of Kumul Petroleum that holds the State’s 16.57% interest in the PNG LNG Project.

When presenting the dividends to the provincial governments, Mr Wapu Sonk, Managing Director of Kumul Petroleum said; “Kumul Petroleum is pleased to work closely with the provincial governments, within the ambit of the law and existing commercial arrangements to ensure that all Kroton Equity Beneficiary Groups receive the dividends that they are entitled to”.

He said “we could have paid out the dividends long time ago when they became due in the past years, but had to delay to allow the Department of Petroleum to complete the landowner identification studies so that everyone could be paid at the same time.

The KEO is an indirect 4.27% interest in the PNG LNG Project, by way of a 25.75% shareholding of in Kroton Limited (Kroton Equity shares) – it is not a direct equity in the PNG LNG Project. The KEO was a commercial option, meaning all the Beneficiaries were required to raise finance and pay for their respective equities.

With that in mind, the National Government also offered to provide Vendor Finance (VF) to the Beneficiary Groups through Kumul Petroleum and further discounted the offer price from US$1.02 Billion to US$640 million and now to US$400million. The VF was first offered as a ‘safety net’ to assist those beneficiaries who might not have been able to raise their share of the purchase price within the option window. As it later turned out, Kumul Petroleum’s vendor finance became the only solution for the Beneficiary Groups.

The vendor finance arrangement also enables the beneficiaries to be paid a preferential dividend at different oil prices above US$45/bbl regardless of profitability, and further offers to forgive any outstanding debt that might remain at the end of project financing agreement in 2026.

Mr Sonk said that the reason for offering the preferential dividend was to ensure that the Beneficiary Groups received a minimum revenue each year (and KPHL bears the risk of absorbing any residual unpaid VF obligations if for any reason the PNG LNG Project reaches its maximum term before the VF loan is fully repaid).

MD Sonk stressed that it was important to note that due to the COVID-19 outbreak in 2020, the oil price had dropped to US$42/bbl (which is below the minimum oil price threshold of US$45/bbl for payment of preferential dividend) and as such, no dividends were declared for year 2020. So the preferential dividends being distributed now were accumulations for financial years 2017 – 2021.