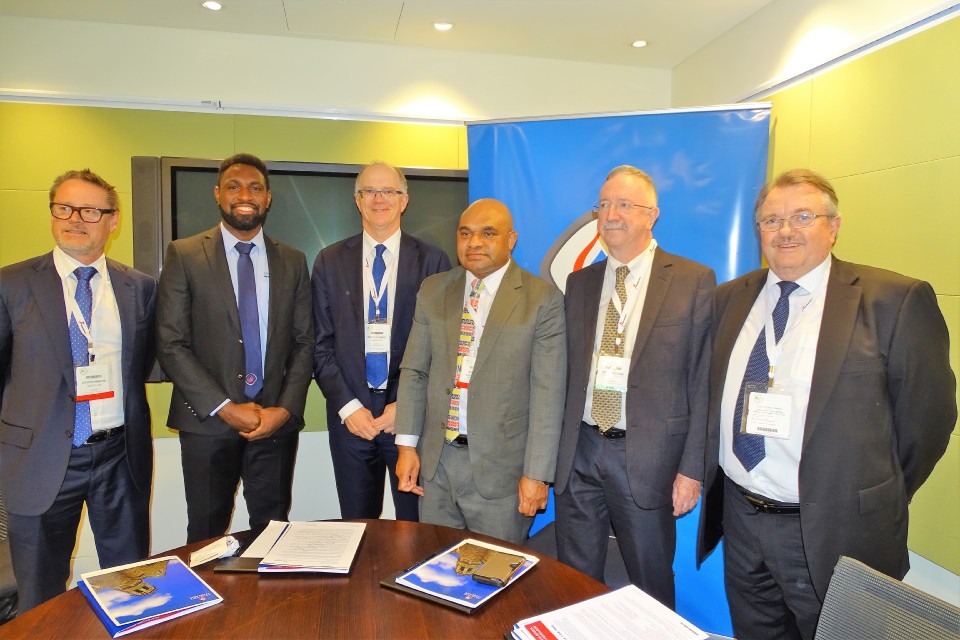 Kumul Petroleum Holdings Thanks Santos for a scholarship award

In a joint press conference KPHL and Santos announced that KPHL geologist Ivano Ivano is the recipient of a scholarship to study a Masters degree in Petroleum Geoscience at the University of Adelaide in 2019, followed by three months operational training with Santos.

The scholarship is part of a new partnership between Santos and the Australian Government to develop technical and management capability in the resources sector in Papua New Guinea (PNG).

Mr Ivano is a graduate geologist with Kumul Petroleum Holdings, a partner in the PNG LNG project, and works in KPHL’s Port Moresby office.

Ivano said he felt very privileged to have been nominated for the scholarship by his company, and to have been selected by the Australian Scholarship awards office and Santos.

“It’s my ultimate goal to be a leader in the PNG oil and gas industry, so I am very grateful to Kumul Petroleum Holdings, Santos and the Australian Government for an opportunity like this, which can only help take the local industry forward,” he said.

Santos Managing Director and Chief Executive Kevin Gallagher said the resources sector was the main driver of PNG’s economic growth and it made sense to help build capability within its local workforce.

“I am very pleased to be able to support Mr Ivano through a Masters in Petroleum Geoscience and then provide him with hands-on experience at one of our operations,” he said.

“The idea is that he will take this knowledge back to PNG and play a bigger part in helping the nation’s economic development to build a better future for the broader community.”

Kumul Petroleum Holdings Managing Director Wapu Sonk congratulated Mr Ivano for being the first recipient of the new Santos scholarship program, which is aimed at growing a highly-skilled workforce in the resources sector in PNG.

“I am very pleased that the program is starting after a few months of working on it and I thank Santos for partnering with Kumul Petroleum in this very important endeavour. It is our vision and goal to create opportunities for Papua New Guineans and this joint effort with Santos to develop our capacity, is a fulfilment of that vision.”

Mr Ivano grew up in the Eastern Highlands of PNG where his father was a field biologist. The cool mountainous environment fuelled his love for the outdoors and, years later, strongly influenced his decision to take up undergraduate studies in geology at the University of PNG.

As well as being an avid reader and music enthusiast, Mr Ivano is currently a member of the PNG men's national basketball team, with whom he hopes to win a gold medal in the upcoming Pacific Games.