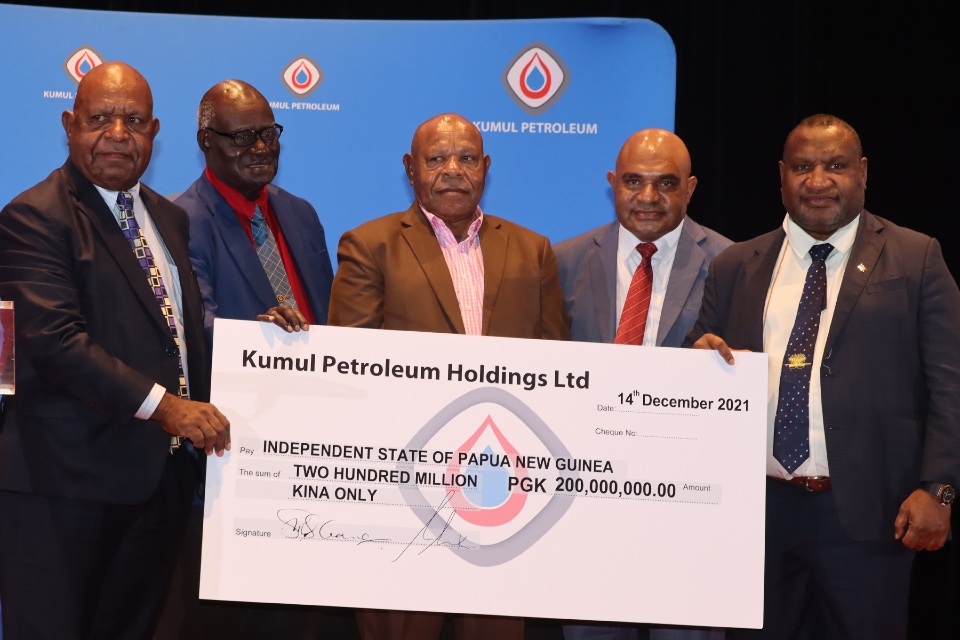 Kumul Petroleum Holdings Limited (Kumul Petroleum) Board Chairman Dr Benedict Yaru at far left, in a symbolic gesture, presents a dummy cheque of K200 million to the Trustee and Prime Minister of Papua New Guinea Hon. James Marape, accompanied at centre by other members of the Board; Paul Nerau, Peterson Pipi and Managing Director Wapu Sonk.

Out of the K300m million declared, K100million was paid earlier while the K200m was paid today. At the same AGM, K251million preferential dividends held by Kumul Petroleum for Kroton Equity beneficiaries paid to 5 Provincial Governments and all the PNG LNG Project Landowners.

Of the K251million paid, K189 million was announced as dividends for PNG LNG Project Kroton Equity Option Beneficiaries (landowners) while K62million is paid to the 5 provincial Governments.

In presenting the dividend payment, Kumul Petroleum Managing Director Wapu Sonk said the K251Million dividends are from the financial years 2017 to 2021 as per the Vendor Financing Agreement that was signed in December 2016 which protected the Kroton Share Option exercise.

Mr Sonk said, “as the Prime Minister Hon. James Marape and his Government announced back in 2019, Kumul Petroleum has been working to free the Kroton option of 4.27% and effective 2022, the Beneficiaries will get full amounts allocated for the 4.27% in Project revenue now under Kumul Petroleum.”

He highlighted to the Trustee shareholder that so far in the last 7 years, the National Oil and Gas Company has supported the Government in various forms such as corporate tax, dividends, Social Programmes and return on capital among others to the value of K5.2billion.

The Managing Director also indicated that Kumul Petroleum maintains a strong Balance sheet of US$2 billion Net Asset and remains cash positive with strong liquidity to be able to invest in other future Projects like Papua LNG, P'nyang and others.

He also expressed satisfaction that Kumul Petroleum has adjusted its business model since 2019 to reflect my Government’s Policy and it’s good to see social programmes that Kumul Petroleum runs is having real impact on lives of Papua New Guineans especially in Rural Electrification, health care at our major referral hospitals in Cancer and Cardiology (Heart) and investments in sports especially rugby league developments.

“I attended 2018 AGM and now is 2019 AGM and I want to attend 2020 and 2021 AGM as this is very critical for such an important company like Kumul Petroleum to be fully audited, with strong Governance structures and fully compliant with Company’s Act, KPHL’s own Act and all our other Laws.”

I would like to thank Kumul Petroleum for delivering K300million Kina dividend to state in 2021 and also the continued assistance in Covid 19 response during the various waves of Covid strains,” he added.

At the same juncture, the Prime Minister reiterated, “as directed in 2019, our expectations are that Kumul Petroleum will continue to work upstream more and less in the downstream, now that you have been awarded Petroleum Retention Licenses (PRL) by Government , take lead in downstream processing, look at Blue Energy (Ammonia) and Carbon dioxide (CO2) injection and Storage, Green Energy etc and help PNG meet the Paris and Glasgow commitments and also protect our future and environment,” Mr Marape concluded.