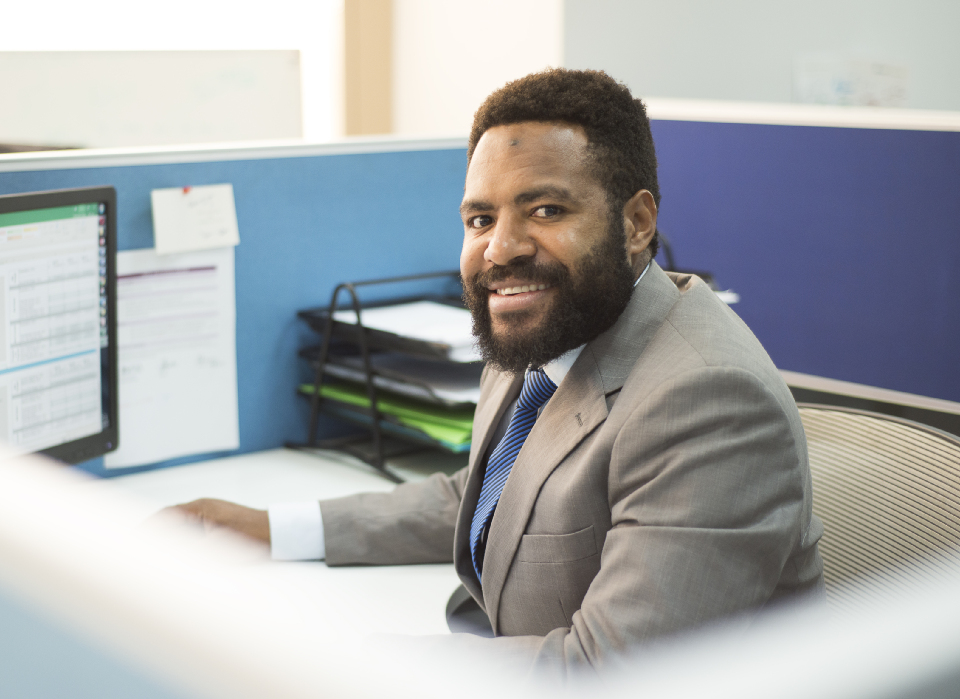 Zechariah Yakap is back at Kumul Petroleum’s head office in Port Moresby.

Back from China, ready for a bright future

Petroleum Engineer Zechariah Yakap, Kumul Petroleum, is back in Papua New Guinea after four months on an educational visit at China Petroleum Pipeline Engineering Corporation (CPPE). “CPPE is the primary builder of pipelines in China and has several large-scale projects abroad. One of those was a huge oil storage tank for Saudi Arabia, 110 metres in diameter and more than 20 metres high. My job was to draft the engineering details for construction of the floating roof component based on their design.”

“CPPE had designed the storage tank with a floating roof that goes up and down with the oil level in the tank. The roof is a metre thick and weighs 1,345 tonnes. I had no prior experience in this field so it was an interesting challenge. Not least because nobody, except my supervisor, spoke English. Some evenings I spent in my hotel room preparing drawings for the next day but it was a great satisfaction to be able to complete the task successfully.”

“Working at CPPE’s head office in Langfang City, I noticed some interesting cultural differences. Their staff pretty much lived there. The company served breakfast, lunch and dinner every day – even for staff members’ family. So staff had little reason to leave the workplace, meaning most of them worked almost around the clock.”

“When I had time off, I explored the city. Langfang City is only about one and half hours’ drive from Beijing but it seems like a world away. Very few speak English – Google Translate became my best friend – and they’re not used to foreigners so kids look at you like you were an alien. They were friendly, though, and the city is big but surprisingly green and beautiful with parks, flowers and walkways everywhere.”

“My girlfriend visited from PNG and we went to see the Great Wall of China together. It was about four hours by bus from Langfang City and it was worth every minute. As an engineer you appreciate the enormous feat it is to build a wall like that with the construction techniques they had back then. Amazing.”

“The wall was a very special place so I took the opportunity to propose to my girlfriend while we were there. Thankfully she said yes so we’ll always have fond memories of the Great Wall of China.”
“I just had my fifth anniversary at Kumul Petroleum. I started in January 2015 on their first Graduate Development Program, aimed at educating future leaders in the industry. Apart from my on-the-job training in Port Moresby, Kumul Petroleum has supported me with educational visits to Australia, Malaysia, Japan, Spain and China.”

“When it comes to empowering Papua New Guineans, Kumul Petroleum aspires to take the lead. Their view is that when you empower the people of PNG, you empower the country. With the experience I gained in China, I will be able to participate in construction projects when Kumul Petroleum takes the next step and enters downstream projects. I can’t wait to play my part in developing my company and my country.”